The following article, written by Martin Hodgson, was published in Pipeburn on 21 August 2015. The original article may be found here.
Cytech, in South Africa, has one simple motto: “Never say die”. So when this 1955 BMW R50 came in on a stretcher with yellow skin, complete organ failure and no pulse they fired up the defibrillator and injected new life into this 60-year-old Bavarian. 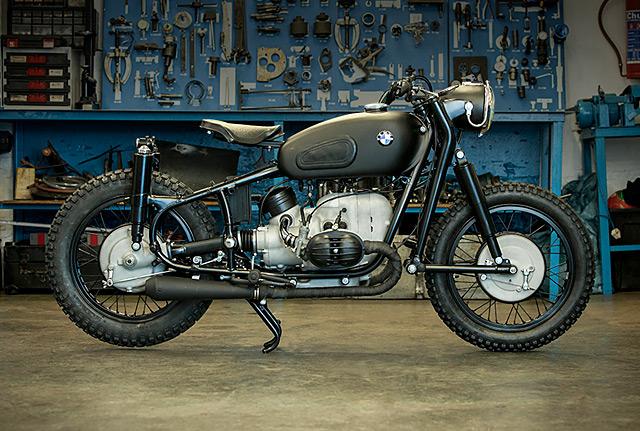 Go for a ride with some true old timers and their machines of yesteryear and it won’t be long before they take a look at your fresh off the factory floor bike and with a dismissive tone claim “They don’t make them like they used to”. Twenty minutes later, with oil covering their jeans, pulled over at the side of the road… again, reaching under the seat for your factory supplied tool kit to find enough gaffer tape to keep their handlebars on. It’s part of the charm, it’s why we love ‘em, but new bikes are for the most part built better in almost every single way and all categories of bikes are covered and then some.

But the BMW R50 is one of the few exceptions to the rule, they simply don’t make them like they used to, it’s a level of sophistication and refinement that just doesn’t exist in modern touring machines, there is no modern equivalent and when first reviewed it was described simply as “gentlemanly” and praised because “the machine could be ridden in ordinary walking clothes without any fear of their becoming soiled.” 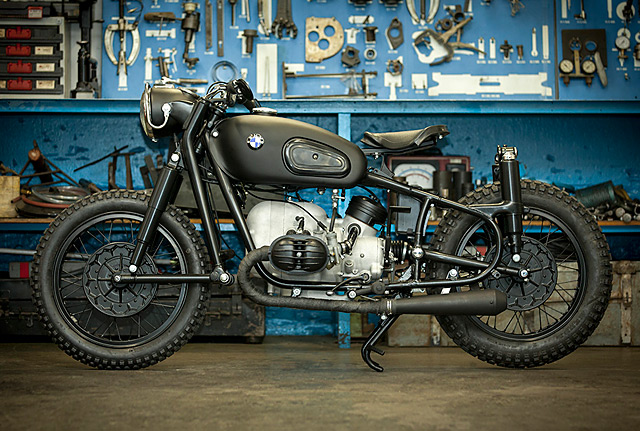 So it made sense when a Father and Son team brought the R50 to Cytech for a rebuild that it was done in a manner that would allow them to restore it to original, if and when they could find those rare parts. Starting with a pension aged, non-running condition, banana yellow painted R50 just goes to show the level of ability Cytech have to produce what you see before you.

The original frame has been cleaned up before being powder coated in satin black for a period correct, durable finish. The gorgeously simple swingarm received the same treatment and like the entire bike is held in place by Galvanised nuts, bolts and mounting parts throughout. To get it into a rolling state the aluminium wheels have been refurbished and rebuilt before being painted satin black and then wrapped in Kenda dual purpose tyres and tubes. 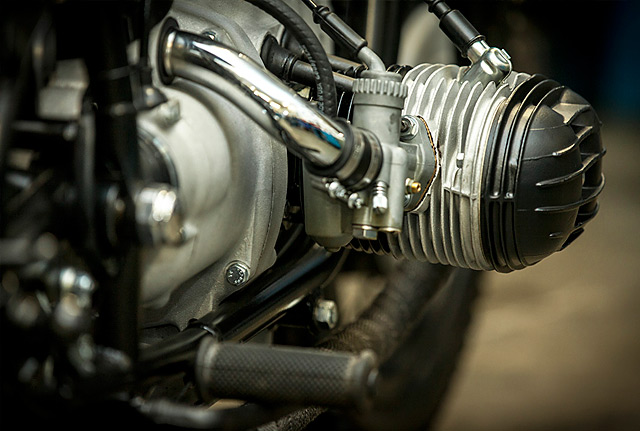 One of the key features to the level of refinement and exceptionalism that is part of the R50 experience is the ultra-smooth, pull from any revs, 500cc boxer twin. Cytech left no stone unturned in returning it to its original glory and that started with sandblasting the engine, gearbox and drive housing. The engine was then pulled down and totally rebuilt with new gaskets, bearings and wiring to support the also new 6V battery and electrical system. Fuelling comes courtesy of a set of new Bing carburettors that are fed by chrome induction pipes from a flat black painted air filter housing. To match the tappet covers, cylinders and kick-start lever were all given the same flat black treatment resulting in an uber clean look. 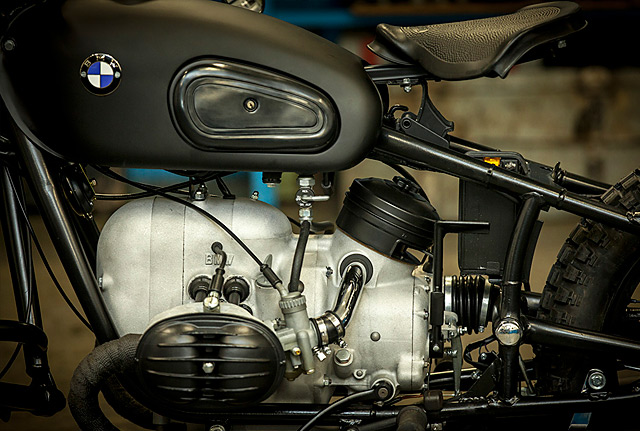 Just like the engine the suspension came in for rave reviews in 1955 with one magazine noting “The machine could be heeled over stylishly on slow or fast curves in the sure knowledge that it would follow the chosen line faithfully.” This at a time when most bikes had you leaving your tooth fillings scattered along the roadside, but for a little 21st century technology Cytech added a taper roller bearing to the steering head. The front and rear shock absorbers and Earles front fork suspension has all been completely rebuilt and the covers painted satin black. While the polished steering damper and polished shock caps and swingarm caps add a great contrast to the satin finish. The twin shoe 8 inch drum up front and single 8 inch rear brakes have been rebuilt and fitted with new shoes. While the outer front brake housing has been sandblasted and a new brake cable along with new clutch and accelerator cables fitted. 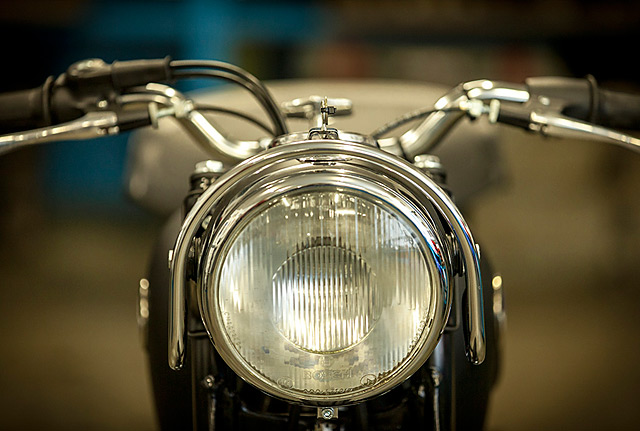 The mechanical features of the R50 alone make it a beautiful bike to look at but that doesn’t mean it can’t be improved upon with a thorough refurbishment. The fuel tank and headlamp shell were both panel beaten and painted matt black with stunning enamel BMW tank badges providing a rare hint of colour. New knee pads have been fitted with a toolbox behind the left pad and a polished aluminium tank cap to top the whole show off. Adding just the slightest bling to this elegant machine are the chrome headlight surround and chrome handlebars that are finished with Magura twistgrips and bar end mirrors for some safety on the African roads. 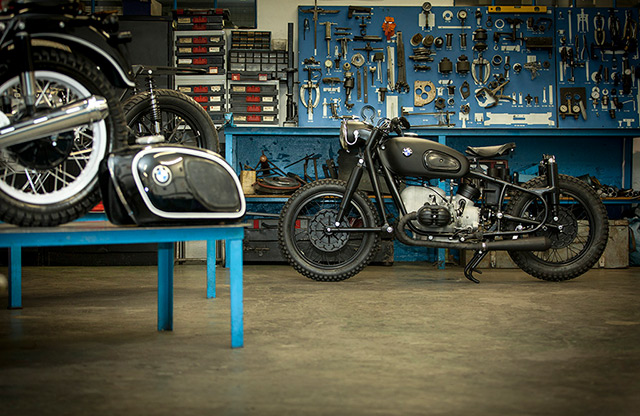 Riding high in comfort and style a gentleman finds his perch on a Pagusa single saddle seat that is mounted to the frame. And so Sir can enjoy the sounds of the Bavarian Boxer in all its majestic glory a pair of black cone mufflers attached to wrapped pipes are one of the few non-standard features. In the end Ray, Don and their team have completed one of the nicest R50 builds anywhere on the planet, a bike that can be ridden and not just sit in a Museum. That should come as no surprise, as Cytech not only build the best BMW’s in Africa they also ride them all over the continent and you can too if you join in on one of their magic tours. 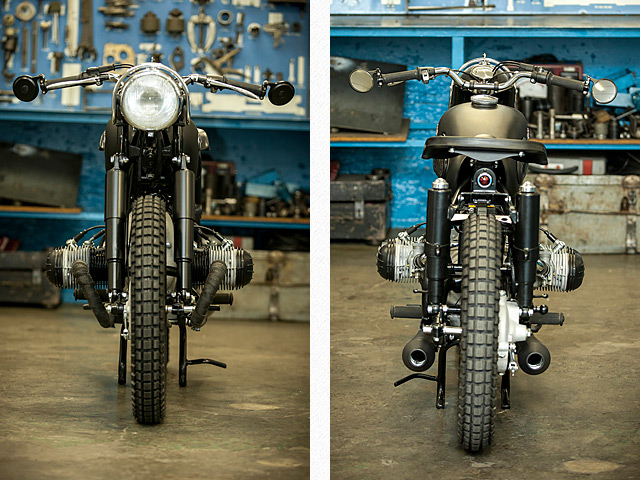 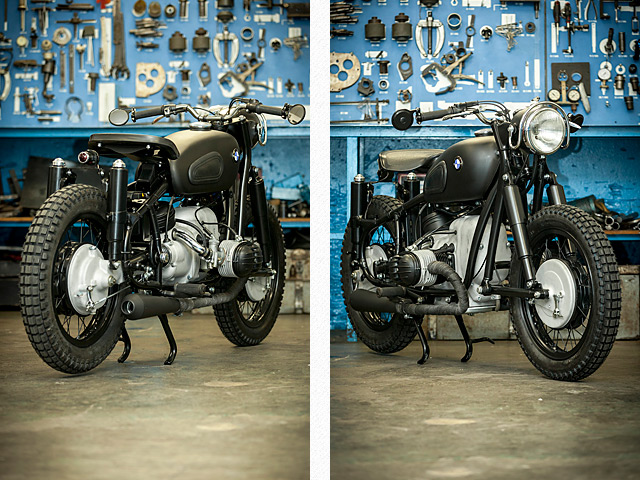